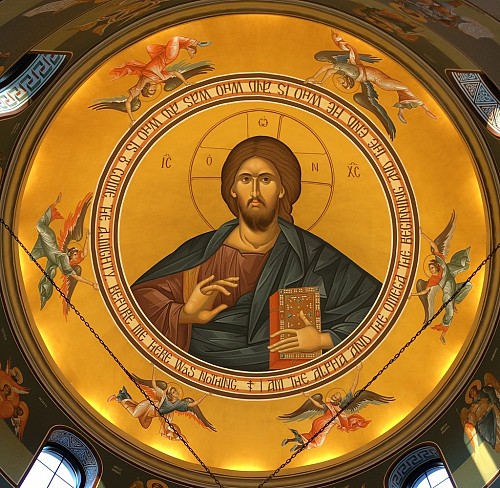 Christ, “Who is the image of the invisible God, the firstborn of every creature: For by him were all things created, that are in heaven, and that are in earth, visible and invisible, whether they be thrones, or dominions, or principalities, or powers: all things were created by him, and for him: And he is before all things, and by him all things consist. And he is the head of the body, the church: who is the beginning, the firstborn from the dead; that in all things he might have the preeminence. For it pleased the Father that in him should all fullness dwell.” The Apostle Paul’s letter to the Colossians (1:15-19)

I am the Alpha and he Omega, the Beginning and the End, He Who is and Who was and Who is to come, the Almighty.  Revelation 1:8

…that ye may know and believe me, and understand that I am he: before me there was nothing [no God formed], neither shall there be after me.  Isaiah 43:10

Jesus told His disciples, “All power is given unto me in heaven and in earth.” (Matthew 28:18). The image of Christ Pantocrator (Greek for “Almighty”), always occupies the central dome of Orthodox churches to remind the faithful that “God is with us”, (Isaiah 7:14; Matthew 1:23). He is the center of our existence, “that in all things He might have the preeminence”, (Colossians 1:18), “for in Him we live, and move and have our being”, (Acts 17:28),

From the books of Revelation and Isaiah, the texts encircling the icon sum up the Orthodox Church’s teaching that Jesus Christ the Almighty was God before time, God during the present age and God of the endless age of eternity. This image seeks to reflect the eternal nature of Christ, Who was, “before all things”, (Colossians 1:17), “in the beginning”, with the Father, (John 1:1), Who, “in the fullness of time”, (Galatians 4:4) became fully man, Whose life and teachings of salvation are recorded in the book of the Gospels, which He holds.

Christ affirmed that He was the God of the Old Testament when He referred to Himself as the same “I Am”, Whom Moses encountered on Mount Sinai. (Exodus 3:14; Mark 14:62; John 9:9) The “ὁ ὤν” found inside the halo of this, and all Orthodox icons of Christ, is Greek for “The One Who is”, the great “I Am”.

The ring that is symbolically upheld by angels represents the eternal kingdom to which Christ ascended after His earthly life, to take His place once again at the right hand of the Father. Christ, “by Whom all things were made”, (John 1:3, Colossians 1:16 & Nicene Creed) raises His right hand as He did at His ascension to heaven, to bless His creation, especially man, who was made in His image and likeness. Christ, “He Who is to come”, will return to earth at the end of time to “judge the living and the dead, Whose kingdom shall have no end.” ( 2 Timothy 4:1 & Nicene Creed)

The Pantocrator, angels, and prophets were painted by Dr. Alin and Smaranda Trifa in 2015. Dr. Trifa is professor of liturgical art at the Orthodox seminary in Cluj, Romania.